After losing his right forearm in a factory accident, Chang Hsien-Liang tried several artificial limbs but he was never satisfied.

The arms he could afford were too basic and the robotic hand he wanted was too expensive.

So the 46-year-old engineer from southwest Taiwan set out to design and build his own prosthetic arm using 3D printing technology.

"After getting my own bionic arm, my daily life improved. It became easier to do things like riding a bike and eating a meal," Chang said in an interview.

At the time of his accident in September 2014, Chang was working as a metal engineer at a stamping plant in Tainan City, about 300 km (186 miles) southwest of the capital Taipei.

Chang said he accidentally pressed the wrong button when operating a stamping machine, leaving his right hand so badly injured it had to be amputated.

Two months after the accident, Chang tried two prosthetic arms but was disappointed. He wanted a hand with moveable fingers but could not afford the thousands of dollars for a custom-made arm.

Chang heard about 3D printing technology and acquired a scanner and printer. With no medical training, he watched online videos to learn about fingers and hands.

After many attempts, Chang said he produced an arm with moveable fingers that cost about $4,000.

"I was very happy and excited, finally my design could be used," he said.

Now, Chang wants to help others.

He is designing and building a prosthetic hand for Angel Peng, an 8-year-old girl whose hand was crippled in a scalding accident when she was nine months old. Her mother Peng Ji-han said they heard about Chang at Angel's clinic.

"She grew up thinking it is normal not to have one hand," Peng said, adding she could not afford an expensive prosthetic for her daughter.

Angel's eyes widened excitedly as she tried to use an early product of Chang's 3D printing to pick up a bottle.

She said she could hardly wait to use her new hand.

"When my hand is done, I will hop onto a bike immediately," she said. 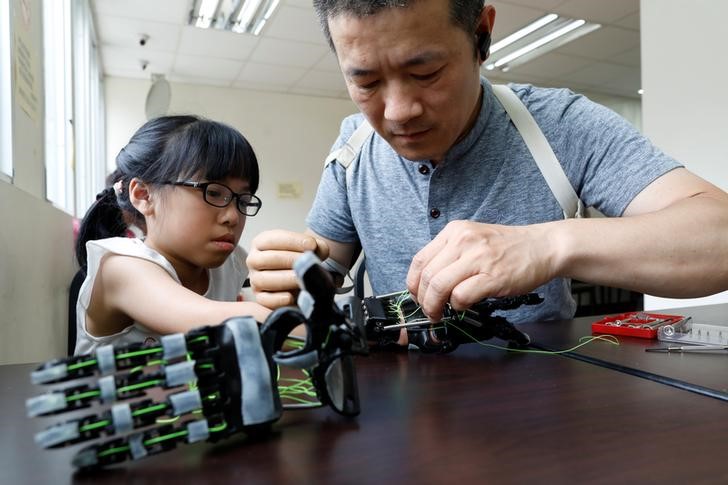